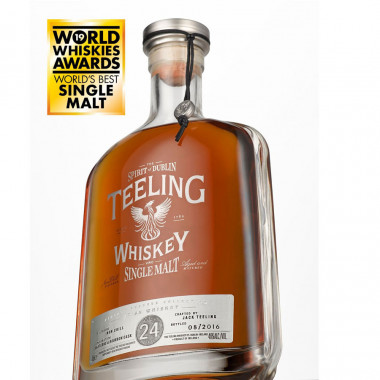 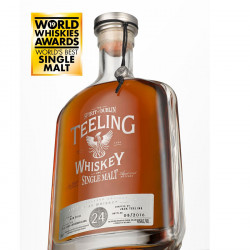 March 2019 - This whiskey received the title of the World's Best Single Malt over 21 years old at the World Whiskies Awards 2019.

Teeling Whiskey offers here an amazing 24 Year-Old Vintage Reserve, matured in Bourbon and Sauterns wines casks. This vintage has been distilled in 1991, and matured for 24 years in Bourbon and Sauterns wines casks, offering a exquisite tasting experience. This technique raises the fruity flavors of the whisky well preserved in the bottling process at 46°, avoiding cold filtration treatment.

This "Small Batch" bottling is hand bottled at 5,000 models, in luxurious jugs all certified authentic.

Palate: delicate fig notes, honey, apricots with a hint of salt at the end.