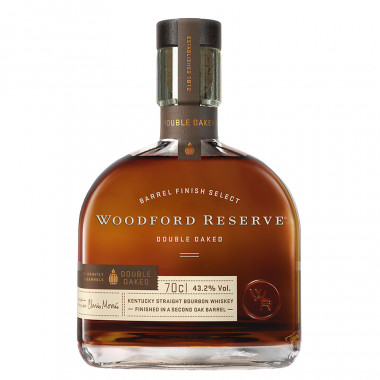 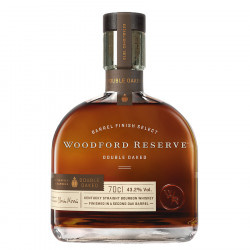 A cellar exclusivity - this very special Bourbon is available in limited quantities.

A cellar exclusivity - this very special Bourbon is available in limited quantities. Crafted in the very traditional way in the oldest distillery of the United States (Woodford County, Kentucky), dating from 1812, this Bourbon has been aged in a unique way. Its double maturation shows true knowldege of cask wood influences on the whiskey.

Indeed, Woodford Reserve Double Oaked has been laid to rest in deep-charred white oak casks, and then a second maturation in twice more toasted and charred new oak casks, a process which coaxes out the natural saps of the wood.

This additional maturation brings added character and roundness to this expression. Its unique taste, twice as intense, stems from the combination of the finest cereals and from the white oak cask quality.

It is the oldest, the smallest and the slowest distillery (when considering maturation times) of today’s last nine Kentucky distilleries.

Woodford Reserve (formerly Labrot & Graham) is located in Versailles, the “bluegrass” region, also known for horse breeding and horse races. The very hard water contributes to the strength of the horses’ bones… and to the unique style of Woodford Reserve’s bourbon. The distillery has been first established as early as 1812, and its stone-walled cellars are unique in Kentucky and more than a century old. Woodford Reserve differs from other distilleries by many aspects, giving its Bourbon a lot of character. The fermentation vats (used in the first step of whiskey making) are made in cypress (not in pine as it usually is), a wood chosen specifically for its neutral effect in the transformation of corn, rye, and malted barley that are used as raw material. And then, the stills. A notable exception in all Kentucky, the whiskey is triple-distilled (like in Ireland) in three different Scottish copper stills of a 9500 liter capacity.