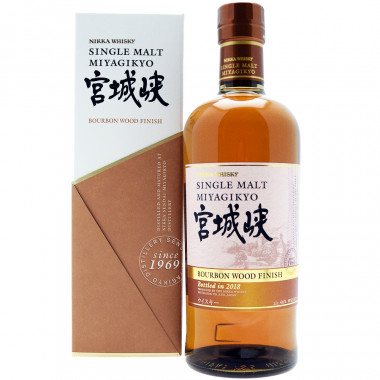 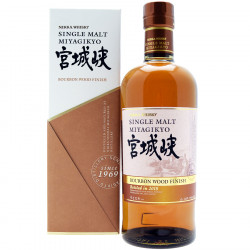 A Japanese Single Malt with a fruity and vanilla taste, married to the woody flavours of aging in Bourbon casks.

Miyagikyo Distillery is Nikka's second distillery located in the Miyagi Valley, a region north of Honshu Island known for its clean air and exceptional spring waters.

As the Taketsuru family owned a sake brewery (fermented rice spirit), Masataka Taketsuru had always been fascinated by the world of whisky. On a journey to Scotland, he took classes in Glasgow University being the first Japanese ever to learn the art of whisky making.

There he meets Jessie Roberta (Rita) with whom he immediately falls in love, and against the wishes of their families, they marry in Glasgow in less than a year. Armed with his knowledge and experience, Masataka returned to Japan accompanied by his wife, who gave him great support in his project.

In 1918, he was hired by the company Settsu Shuzo to produce the first Japanese whisky, but the company went bankrupt in 1922 following the stock market crash.

Palate: perfectly balanced with a nice aromatic intensity on the pear and white peach, raised by a hint of vanilla.

Finish: sustained with the appearance of lemony notes.