Sales | Up to 50% off! >
Our CellarWhisky Whisky by countryScotlandHighlandsTomatin 12 Years Old 1L 43° 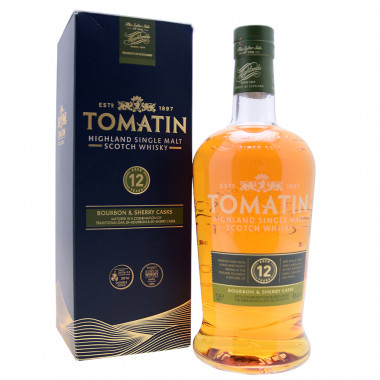 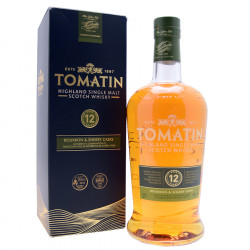 This Highlands Single Malt is silky and fruity thanks to its maturation in old Bourbon casks and its aging in Xéres casks.

The 12-year-old Tomatin is a sweet and smooth Single Malt, matured in old Bourbon casks then aged for six to nine months in Oloroso Sherry casks. Rich and fruity, it is also marked by sweet flavours of apples, citrus and sweet spices. Its finish is long and oily.

To be enjoyed preferably pure.
It will go very well with a fresh goat cheese.

Founded in 1897, the Tomatin Distillery is located on the edge of the namesake village in the Highlands, Scotland. It distills its whisky with the pure water of the Monadhliath mountains and has 12 active alambics.

Nose: elegant and complex. Delicious combination of fruit and spice, with fresh aromas of apple balanced by richer notes of spice.

Palate: delicate and fruity on the palate: apple, toffee, malt, citrus and spices.

Finish: long and gourmet with notes of lemon, spices and fruits.

Silver Medal in 2015 of the International Wine & Spirits Competition.

Best Single Malt Award 12 years and over in 2013 at the World Whiskeys Awards.

To be enjoyed preferably pure.

It goes very well with a fresh goat cheese.