Sales | Up to 50% off! >
Our CellarWhisky Whisky by countryUnited-StatesKentuckyBlanton's Original 70cl 46.5° 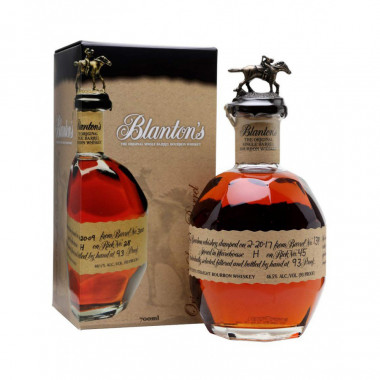 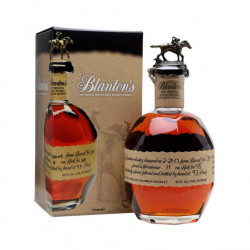 Blanton’s Original is a Single Barrel with unique flavours of ripe fruits, vanilla, spices and oak.

The particularity of this Blanton's Original is that it is the first Bourbon bottled cask by barrel in 1984, which makes it a unique and elegant Single Barrel.

Made from corn, rye and martley barley, this Kentucky Straight Bourbon reveals an aromatic profile with delicious notes of vanilla, ripe fruit, oak and spices.

A fine reference in the range, titrating at 46.5%, offered in a bottle reflecting its character, unique and singular.

Blanton's is an American Bourbon whiskey brand distilled by the Buffalo Trace distillery in Kentucky.

In 1983, the brand became known as the first to sell Bourbon bottled cask by cask (Single Cask), under the name Blanton's Single Barrel Bourbon.

This type of product then developed rapidly in other distilleries in the United States (Jack Daniel's, Heaven's Hill ...) and is commonly used in so-called "high-end" products.

This pure Bourbon whiskey bears the name of Colonel Blanton, who directed the distillery from 1912 to 1953. The creator was inspired by his predecessor, using the abandonment of the principle of rotation of the casks to give each barrel a unique fragrance.

Blanton's is currently part of the Sazerac Company group.

Nose: spicy on peppery notes welcomed by ripe fruits, vanilla and a touch of oak.

Palate: broad and creamy, with warm notes of vanilla, toffee and clove.

Finish: long, fruity, spicy and woody aspects of the mouth.