Sales up to 50% off. 2nd markdown : extra 10% off on textile items already on sale! Discover >
Our CellarRum CellarTypes of rumOld RumDiplomatico Ambassador 70cl 47° 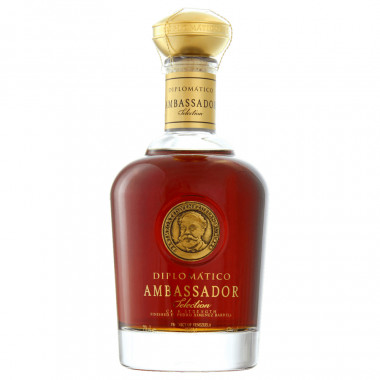 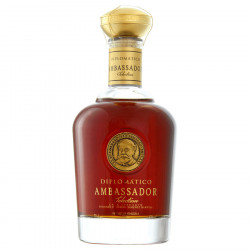 Diplomatico Ambassador is an exceptional rum that has matured for 14 years and has a rich and complex aromatic palette. To discover.

Diplomatico has developed with its Ambassador, an exceptional rum. Distilled from molasses and sugar cane honey in the Spanish tradition, this rum is the result of an assembly of the best reserves of the distillery. Tito Cordero, rum master of the distillery who was also awarded the title of best rum master in the world in 2014, made this very special selection.

Diplomatico Ambassador has aged 12 years in oak barrels, then two more years in sherry barrels Pedro Ximénez to bring more wealth to the whole. It is an old rum and upscale, bottled at 47°.

At the end of the 19th century, in Venezuela, Don Juancho Nieto Meléndez discovered a passion for sources and methods making the success of traditional beverages.

He was fascinated by the subtle complexities of surrounding factors such as sunlight and humidity that affect the production of rum. He collected both liqueurs and exotic rums and became famous for his well-stocked supplies quickly nicknamed the "Ambassador Reserves" in reference to his status and his love for good things in life.

He studied production methods used in Jamaica, a reference in the field at the time. On other islands of the Antilles, he scrupulously observed the refining of sugar cane and imagined variations to create a new type of rum. Over time, a clever combination of ingredients, wooden barrels and honey led Don Juancho to create Ron Diplomático.

Nose: very aromatic, it offers richness with notes of dried fruit, red Port and fresh tobacco. We can distinguish vanilla and spices typical of Diplomatico.

Palate: it is complex and unctuous with a lot of spices: cinnamon, nutmeg, vanilla; while developing beautiful notes of fruit, dark chocolate and coffee.

Finish: long and hot, it gives a boost to the aromatic palette.