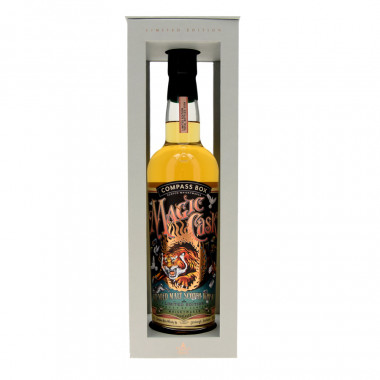 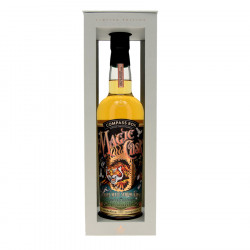 The Magic Cask whisky from the Compass Box distillery is a rich Blended Malt with fruity and vanilla aromas.

Using samples from the Imperial Distillery (closed today), John Glaser has crafted a new high quality Blended Malt for Compass Box. This Imperial whisky has been aged in first fill Bourbon casks. It is overflowing with fruity and vanilla notes.

John Glaser took a moment to strike the perfect balance and deliver a rare quality Malt.

For this blend, he found the ideal partner: a robust and full-bodied whisky distilled in 2016 in a Speyside distillery. This whisky has benefited from aging in first-fill Sherry barrels and a one-year stay in Bourbon barrels, for a fruity, vanilla and surprisingly rich result.

One barrel in particular, combined with rare samples from the Imperial Distillery, gave birth to this incredibly rich Magic Cask Compass Box.

Finish: long on notes of cocoa powder and toffee.