Sales up to 50% off. 2nd markdown : extra 10% off on textile items already on sale! Discover >
Our CellarWhisky Whisky by countryScotlandSpeysideAberlour Forest 10 Years Old 70cl 40° 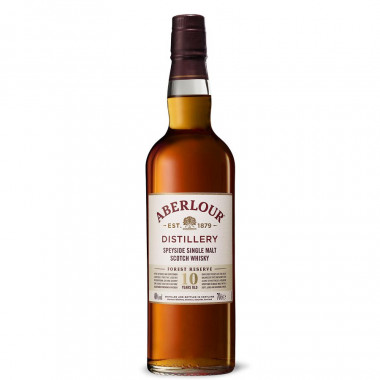 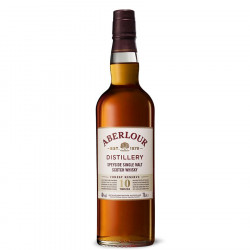 New version of the Aberlour 10 years old with an additional finish in French oak barrels of the Limousin for this Single Malt.

Aberlour presents the new version of its 10-year-old Single Malt under the name "Forest Reserve". A name that reflects the commitment of the Scottish distillery to the preservation of the environment, especially in its native region of Speyside.

After maturing for at least ten years in casks containing Bourbon and Sherry, this new edition brings an aging in an additional cask with a finish in French Limousin oak barrels.

The final product is a rich and lively whisky, marked in particular by a beautiful presence in the mouth. Old gold with copper highlights, the nose is marked by damp wood, sherry with mint and candy notes. The rather dry but sweet palate evokes hot honey and spices. The long finish evolves on the spices with a slight bitterness.

Aberlour 10 years is for casual amateurs who want to learn about the world of Single Malts.

Nose: rich, with subtle, dry and fresh aromas joined by a lovely pear and apple fruitiness reminiscent of the first days of autumn, deepened by notes of vanilla and mentholated caramel.

Palate: an exceptional, mellow creaminess with a bittersweet touch of nutmeg and honey combined with the freshness of autumn fruits and minty, spicy and Sherry notes.