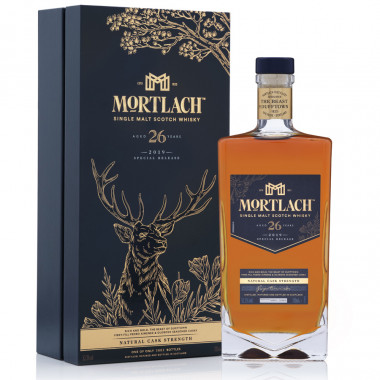 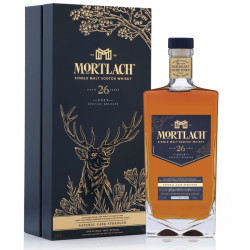 Aged for 26 years in sherry barrels, this rich and complex Mortlach Single Malt is a Special Release in limited edition.

Dubbed "The Beast of Dufftown" for its robust character, the Scottish distillery Mortlach reveals a rich and complex expression with this 26 years old Single Malt.

A limited edition, aged for 26 years in Sherry Oloroso and Pedro Ximenez first fill casks and bottled to its natural degree of 53.3°.

Only 3,883 bottles of this Special Release with an assertive aromatic profile have been produced worldwide.

Mortlach is a distillery located in Dufftown, Speyside, Scotland. It was created in 1823, the year when the first authorizations to distill were granted ("Law of the consumption tax").

This is the first distillery built in Dufftown, and there are now around ten. The distillery was purchased by Johnnie Walker in 1923. It now belongs to the Diageo group.

Throughout the Second World War, Mortlach was one of the few distilleries in Scotland able to produce whisky in limited quantities.

The distillery has the particularity of producing whisky with 2.8 distillations: 80% of the product is distilled three times, and the remaining 20% is distilled only twice.

The taste characteristic of Mortlach is its fleshy side, which is linked to the traditional flavour of Speyside

Nose: Smooth and deep with a slight pungent touch. Rich in red fruits, the aromas are marked by the maturation in sherry cask, adding oak, leather and caramel fumes.

Palate: rich in tannins and raw on a honey texture. The flavours are strongly influenced by the fruit sweetened by plum and black cherry, as well as the strength of leather, tobacco and chocolate.

Finish: of a nice length and persistent, carried on red fruits and spices.