Our online store is open for your orders. Learn more about delivery >
Our CellarArchivesJura Turas Mara 1L 42° 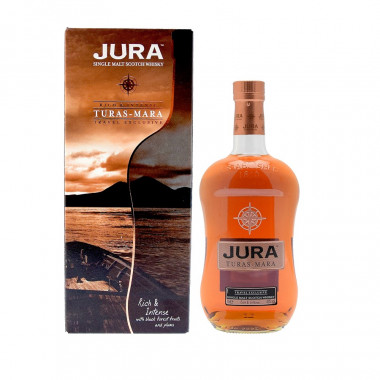 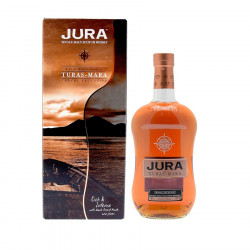 Rich and intense, this is the new release of the Jura distillery named Turas Mara ("long journey" in Gaelic).

The Jura distillery has always been inspired by its Island history: Turas Mara, meaning "long journey" in Gaelic, refers to the long migration periods in the 18th and 19th century when the Diurachs (Jura's inhabitants) had to leave to find work abroad, in Canada or the United States. A poem of Jessie Scott, a Diurach poet, expresses his sorrow and distress at the idea of leaving his island behind never to see it again.

Like the inhabitants of Jura kept the spirit of their island while leaving for faraway countries, Turas Maras features flavours of distant lands while being intensely Diurach. This expression is a blend of four different casks: Kentucky Bourbon, Spanish Sherry, French oak and Port casks.

Palate: velevety texture with a pleasant sweetness at the fore, followed with tanins and spicy pepper. A drop of water brings out vanilla flavours and dark cherry jam.

Finale: pleasantly sweet, with an inkling of almond in the end.