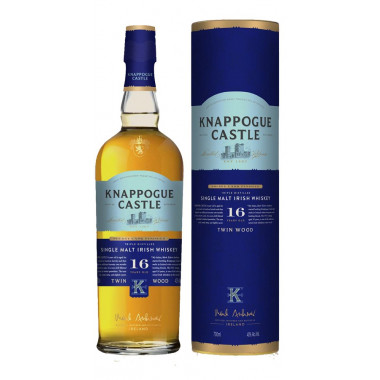 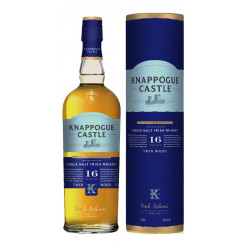 Knappogue Castle 16 Years Old is a Single Malt Irish Whiskey, produced in the famous castle built by Sean MacNamara in 1467, restored by Mark Edwin Andrews, its new landlord. This exceptional expression is the first double-matured Knappogue.

Knappogue Castle 16 Years Old has been produced from malted barley and triple-distilled in pot stills. This spirit is non peated to retain all the character and flavours of the Irish barley. This premium Single Malt has been aged in Bourbon barrels for 14 years and 3 months, and refined in Sherry casks for the last 21 months.

Quite aromatic, this double-matured Single Malt has been bottled without additional colourings and non-chill filtered, preserving all the qualities of the whiskey and its natural golden colour.

For centuries, fine whisky has been produced in Ireland. The word “whiskey” comes from ancient Gaelic “uisce beatha”, meaning “water of life”.

In the 1960’s, Mark Edwin Andrews, an American with strong ties to Ireland, purchased barrels of Irish whiskey. He left them to age before bottling them under the Knappogue label, the name of his castle originally built by the MacNamara clan in County Clare, 1467, in order to lead the rebellion against the Norman invasion.

Knappogue Castle keeps the tradition alive as initiated by the Andrews and produces exceptional Single Malts. Mark Edwin Andrews and his wife Lavone Dickensheets Andrews, a Texas architect, embarked on a journey to return the castle to its past grandeur and glory, and then Mark Edwin Andrews fell in love with the art of bottling and built the quality Knappogue Castle brand.