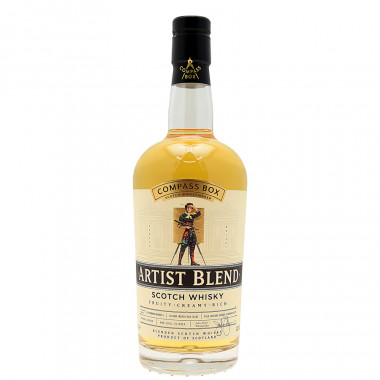 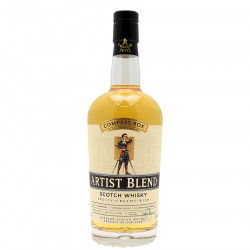 A combination of fruity and complex Highland malt whiskies with delicate Lowland grain whiskies. The taste is rich, fruity and creamy.

Artist Blend is based on a careful blend of malt and grain whiskies, determined by John Glaser from Compass Box.

The malt to grain ratio of approximately 50%-50% demonstrates the importance John Glaser places on malt in the final recipe. As for the choice of single malts, the Northern Highlands were favoured for the spring and fruity aromas they bring.

In the end, his approach is reminiscent of the vatting tradition dear to Ireland, renowned for its high malt or pot still whiskey blends. As for the label, it is inspired by the Scottish National Gallery in Edinburgh, a famous art museum with a large number of paintings and sculptures.

Palate: both nervous and unctuous. The Single Grains and Single Malts are perfectly blended. So much so that it is almost impossible to dissociate them. Tense with a superb malty sourness, it evolves on spices (clove) and on a greedy note of baked apple.

Finish: long, more saline than sweet, it is also oily. With a note of vanilla. Continues on menthol, liquorice and ripe fruit.