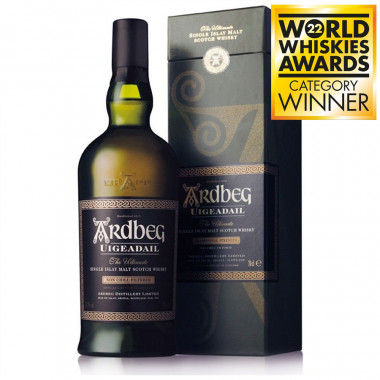 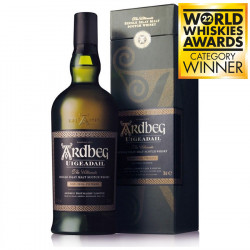 A remarkable and fascinating result, as the fruity is so well-matched with the peaty smoke, without muffling it.

This whisky has received a gold medal for the category Best Single Malt Scotch whiskies No Age statement (NAS) at the World Whiskies Awards 2021.

Ardbeg Uigeadail develops at least two essential features: it is a 54.2° combination of at least 10 Year-Old un-chillfiltered whiskies, this Single Malt being composed of a malt aged in Bourbon barrels combined with an older malt aged in Sherry casks.

The "Uigeadail" name underlines Ardbeg's peaty character, as it is the name of the Loch from which the water is drawn for the malt elaboration. This water comes from a few miles off the distillery and takes its peaty character  meandering in the peatlands where it absorbs various herbal aromas.

The other feature of Uigeadail highlights the masterful know-how of Ardbeg Cellar Masters, as the combination of such peaty malts with the sherried fruitness is a tricky task, even risky such the aromatic styles are different.

The result is remarkable, fascinating, as the fruitiness matches perfectly the peaty smoke without muffling it.

Nose: marked by smoke, with a nice fruity richness (dates, raisins). With a little water, the honeyed character develops further.

Palate: it is first the softness that settles, with notes of caramel and creamy honey, and also candied fruit, Christmas pudding. Then the smoked flavours (smoked salmon or grilled meat) are revealed in the background, without ever hiding the first fruity notes. With a very good balance, the exchange between the two families of aromas takes place permanently, offering a surprising complexity and a renewed pleasure for the taster.

Finish: very long, remains in the same complexity, in a great general sweetness.

"Best Single Malt in the World of the Year 2009" by Jim Murray, author of The Whisky Bible.