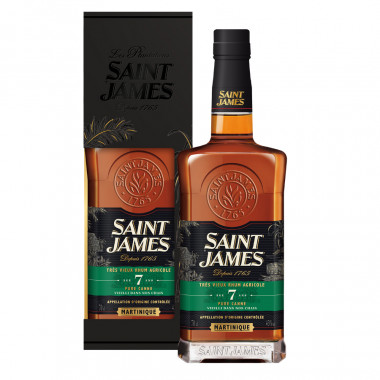 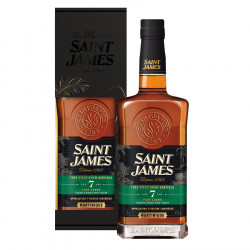 This Saint James rum aged of 7 years is one of the must-try of this distillery.

Saint James rums are agricultural meaning they are made from pure fresh sugar cane and this process allows 7 year-old Saint James to become a very interesting cuvée to taste.

Aging in small ex-bourbons barrels in the tropical climatic conditions of Martinique allowed it to extract the essence of the wood that constitutes the barrel.

The aging process is accelerated by humidity and the constant high temperature which involves aging twice as fast as aged rums in cold climates.

The total evaporated volume, also called the share of angels, reaches 35% and offers the rum a nice concentration of aromas to be appreciated rather dry.

Nose: sweet spices, cinnamon with a hint of vanilla and hints of dried fruit and candied fruit.

Finish: ample and round.

This rum was awarded at the "International Rum Conference" by a double gold medal in 2016 in Madrid and a gold medal at the World Contest in Brussels.