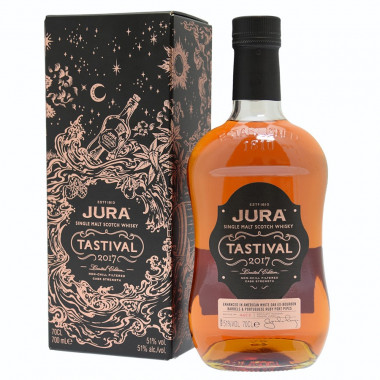 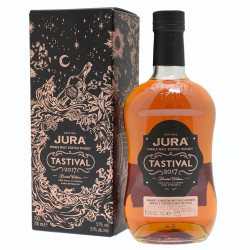 A cask strength limited edition with a rich and powerful identity resulting from the alliance between Jura's typicity and the spirit of the Douro valley in Portugal.

For the year 2017, Jura Tastival took its inspiration from the Douro valley, in Portugal, to create the bottling of this exclusive Single Malt presented on the occasion of the distillery's own annual whisky festival.

This Single Malt is non chill-filtered and bottled at cask strengh, is matured in Bourbon white american oak casks of first filling and in Graham's porto casks from the Douro valley in Portugal.

This limited edition is the result of a selection of the best matured eaux-de-vie in the Jura's cellars. Non chill-filtered and bottled at cask strength, Jura Tastival 2017 has a strong character. The Single Malt is magnified by the richness of a maturation in ex-Bourbon white american oak casks of first filling and in Graham's porto casks  from the luxurious Douro valley in Portugal and carefully selected for their quality.

Jura Tastival 2017 is the first limited edition to be supervised by Graham Logan, the new head of the distillery, who succeeded to Willie Cochrane in Septembre 2016.

Nose: red and dark fruits, hint of liquorice and plums.