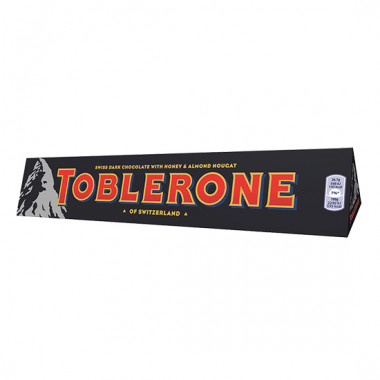 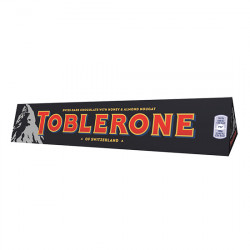 The new dark chocolate Toblerone bar with honey nougat and almond is here!

The Toblerone bar is now available in a dark chocolate version with honey nougat and almonds in a black packaging.

It's been more than a century since this unique chocolate was created. With its special recipe, its triangular shape and its typical logo, Toblerone quickly became the Swiss chocolate par excellence. Toblerone is a word consisting of the names "Tobler" (family name of the creators) and "Torrone" which means nougat with honey and almonds in Italian.

The history of the brand really began in 1867 when Jean Tobler opened his "Special Confectionery" in Bern, Switzerland.

Very soon, the demand for Tobler chocolates is so strong that Jean Tobler ends up opening his own chocolate factory. With his sons, he founded the "Berne Chocolate Factory, Tobler & Cie".

Today, the production of this famous chocolate is still made in Bern.

Keep in a cool, dry place.

Best before: see date on pack.