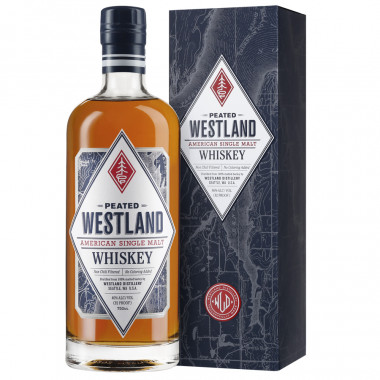 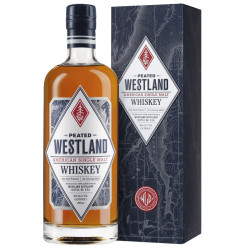 An original and peaty version of the Single Malt whiskey from the Westland distillery, a blend of peated and unpeated malts for a balanced and delicate result.

An original and peaty version of Single Malt whiskey from the North West American Westland distillery. Unlike most 100% peated malt which displays a character of raw and thick smoke, Westland wanted to innovate by working assemblies of peated and unpeated malts for a balanced result with class and finesse.

Produced from 5 types of barley (Washington Select Pale Malt, Munich Malt, Extra Special Malt, Pale-Chocolate Malt and Brown Malt), this edition has all the singular style of Westland whiskeys. The Single Malt has benefited from a minimum aging of 3 years in new American oak barrels (Cooper’s Select and Cooper’s Reserve) and in 1st filling Bourbon barrels.

Unfiltered cold, Westland Peated Single Malt has a toughness between 20 and 25 ppm and an aromatic profile reminiscent of the campfire, with almonds and notes of orange zest.

Nose: the first nose reveals smoke and buttery notes of nuts. Next comes aromas of smoked orange zest, grilled plantains and undergrowth blending with notes of the first nose.

Palate: smoke lines the palate before giving way to notes of roasted pistachios and iodized green grass. We detect the flavors of earthy spices that balance the whole.

Gold medal at the Whiskeys of the World Awards 2016