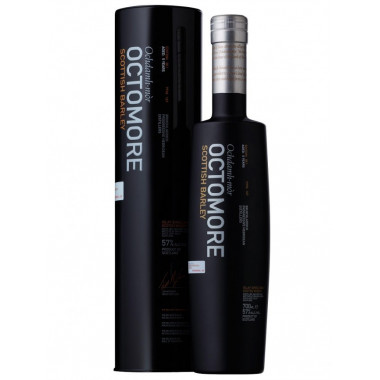 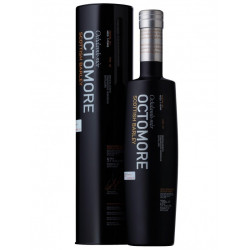 From the most heavily peated whisky range, Octomore 6.1. is the sixth release of Bruichladdich's Octomore.

With its 167 ppm, Octomore 6.1. has burst into a world of conformism, challenging old conventions that link Scotch quality to maturation. Octomore has been since 2008 the world's most heavily peated whisky. Named after the farm that hosted the forsaken distillery of its origins, Octomore is the result of a long night's talk of Jim Mc Ewan, the distillery's Malt Master, around a dram of Bruichladdich. Why not putting the long-necked, thin copper stills of the distillery to trial, he thought, and produce the most exquisite malt from the most heavily peated barley ever seen? A five year-old whisky, this Islay Single Malt uses Scottish malted barley, and ages in American oak casks. The spirit is then bottled at 57° ABV, a burst of power always perfectly mastered for the whole Octomore range.

Destined to advanced whisky enthusiasts or for those who wish to experience the most heavily peated, but also elegant and amazingly crafted whisky.

Nose: a burst of oceanic freshness, spindrift and seaweed, followed by a majestic peat wave with a swirl of heather and mentholated lemon.

Palate: a strong presence of the malted barley, allowing the oak to break through with sweet notes of vanilla, joined by green lemon, apple and pear brought by the distillation.

Finish: incredibly long, everlasting, leaving its trace on the mind and heart long after the last sip.