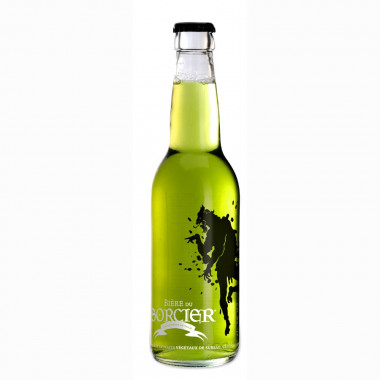 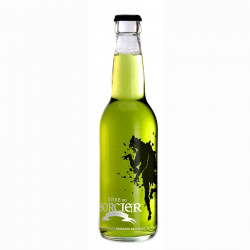 Bière du Sorcier (The Wizard's Beer) has been crafted by an engineer, master-brewer and inventor of speciality beers. Its green colour originates from the nettle used as a special ingredient of the beer.

Bière du Sorcier (The Wizard's Beer) has been crafted by an engineer, master-brewer and inventor of speciality beers.

According to legends, the fear of the devil was high at the end of the 16th century, and widely spread amongst the forests of the Vosges. More than 700 people died on the stake, accused of witchcraft and sorcery. The town of Senones only was spared from the hunt. Indeed, the Counts of Salm, protectors of the town, appealed to a great Wizard full of wisdom to protect the Senonian of this relentless witch hunt. Unnoticed by the Senonian monks, a secret potion was then distributed amongst the population and protected them from the hateful witch hunters... Inherited from these old times, the Wizard's green beer is brewed with a blend of aromas.

Its green colour stems from the nettle used in the making of the beer. Bière du Sorcier was released in Senones, Vosges, the mythical and historical birthplace of this beer! Senones is located in the Salm principality. Independent territory whose origins hark back well before the Middle-Ages, this principality only became part of the French territories after the 1793 French Revolution!

This top-fermented beer will reveal all of its qualities when chilled to 5°.