Sales up to 50% off. 2nd markdown : extra 10% off on textile items already on sale! Discover >
Our CellarBeersFlavoured beersChérie Raspberry 33cl 3.5° 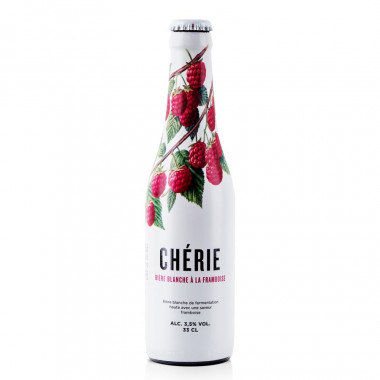 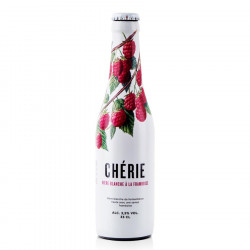 Chérie is a Belgian white beer flavoured with raspberries. It is refreshing and light with fruity flavours.

Chérie is a Belgian white beer flavoured with raspberries aromas. It is refreshing and light with fruity flavours. It is brewed at the Abbaye d'Aulne.

It has a pink colour and offers sweet fruity aromas of raspberry to the nose. On the palate, it is refreshing, light with intense fruity flavours and sweet notes of raspberry.

It is in the majestic setting of the Aulne Abbey in Belgium that two enthusiasts relaunch the production of beer at the Abbey.

The monks of the Aulne Abbey lived in total autonomy and produced their own bread, beer and livestock until 1850.

The abbey brewery destroyed, it is in the stables that two Belgian enthusiasts relaunched the beer production in the 1990s.

In May 2019, the new Val de Sambre site was inaugurated in Lobbes and enabled the expansion of the brewing activity in order to offer regular taste quality and to offer beers from the Abbey of Aulne for export.