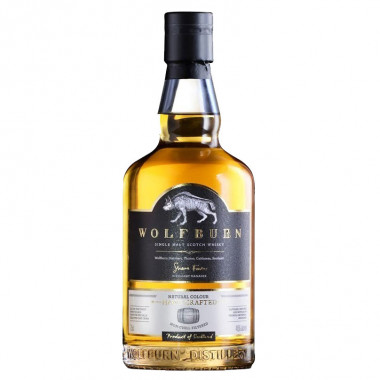 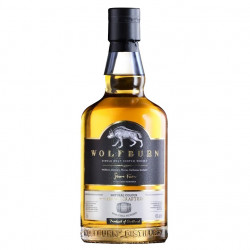 Wolfburn Northland Original is a smooth and elegant Single Malt with a slightly peaty and fruity profile.

Soft and elegant, this Single Malt is the result of a number of essential factors: carefully selected local ingredients, mineral-rich water, slow fermentation and smooth distillation in order to harvest only the purest part of the distillate.

This whisky was custom-created by master distiller Shane Fraser and now orchestrated by Iain Kerr.

Wolfburn rose from its ashes in 2012 under the spur of a group of investors in the County of Caithness. The distillery sits on the northernmost part of Scotland in the town of Thurso.

Originally, Wolfburn is a distillery created in 1821 by William Smith, the name is inspired by the water source flowing near the site. The distillery was considered at the time to be the largest in Caithness County and distilled, according to records, around 125,000L of alcohol per year.

It seems to stop whisky producing from the 1850s for no apparent reason and no tasting or bottle notes have come down to us.

The current building was not built on the ruins of the old one but at about 350m. The first distillation was launched in 2013 for a first bottling in 2016. Orchestrated at the launch by Shane Fraser, former master distiller of Glenfarclas, it was then Ian Kerr, former of Glenlivet, who took over from 2019.

The distillery has chosen not to automate its production, each step is done by hand, the fermentation is long and the distillation gentle. This precise method allows the production of whisky that is both complex and rich.

Palate: round with notes of green apple, peach and white flowers.