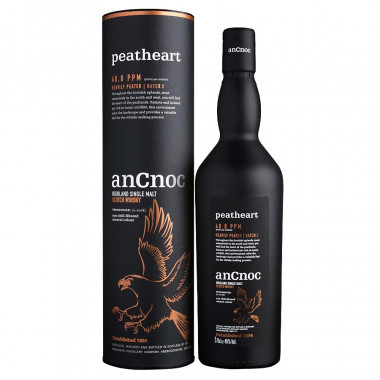 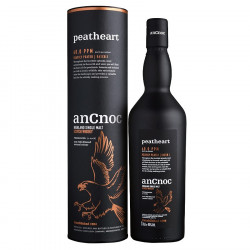 Second limited edition of the Acnoc Peaty range, this 40 PPM peaty Single Malt is aged in Bourbon casks and bottled at 46 °.

The Ancnoc Peatheart is the latest edition of the Acnoc Peaty range. It is the most peaty Single Malt from the Knockdhu distillery at 40 PPM*. It is produced in the heart of the Highland peat bogs, it is aged in Bourbon casks before being bottled at 46 °.

This second batch offers a gourmet version marked by its characteristic ashy and smoky side to which fruity notes are added.

AnCnoc Whiskies are produced by the Knockdhu Distillery located in the village of Knock in Scotland and more specifically in the Speyside region. This name was given to avoid confusion with the Knockando Distillery.

The Knockdhu distillery opened its doors in 1894 under the leadership of John Morrison, it is ideally located, indeed the presence of water source as well as the abundance of peat and barley allows the production of Whiskey.

Tradition is part of the soul of the distillery, since its creation it has used copper stills unchanged in their shape, giving a light and fruity Whisky. The production method has remained almost unchanged for 100 years, and the current modifications are mainly related to the desire of the distillery to have the least possible impact on its environment.

Nose: fine notes of peat smoke and barbecue reveal ripe pineapple, pear and the delicacy of apples cooked in caramel. Vanilla and fresh lemon peel give the composition lightness and elegance.

Palate: structured and rich, it evolves between smoke and freshly cut hay, then on soft and light notes of dark chocolate and fudge.

Finish: Long and expressive, it is subtly marked by spices and smoky notes.