Sales up to 50% off. 2nd markdown : extra 10% off on textile items already on sale! Discover >
Our CellarWhisky Whisky by countryIrelandBushmills 10 years Gift Pack 70cl 40°+ 2 glasses 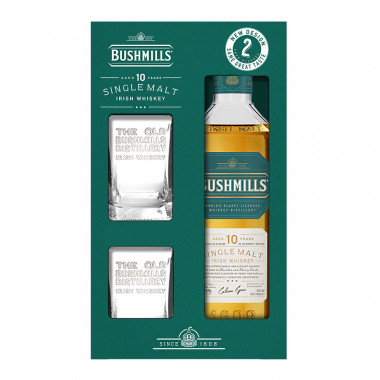 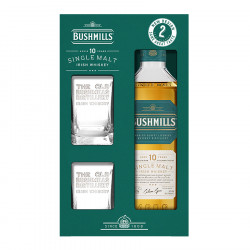 Bushmills 10 years is the most famous Irish Single Malt with a unique expertise of 400 years, the Bushmills distillery offers the Single Malt 10 years in its gift pack with two whisky tasting glasses.

Bushmills is an irish world-renowned Single Malt for its strong and mellow taste. Bushmills 10 years has aged and matured in Bourbon and Sherry barrels, to bring a nice refreshing taste to the whiskey with vanilla and honey notes.

Bushmills 10 years is presented in its gift pack with two whisky tasting glasses, perfect to enjoy between amateurs or connoisseurs.

Nose: elegant and perfectly balanced, reveals impressive smoothness and subtlety over malted grains notes, citrus fruits (lemon) and liquorice. After a while in the glass, wafts aromas of flowers, vanilla and clover.

Finish: of good length, with an exquisite herbaceous dryness.

For an ideal sip of Bushmills Single Malt 10 Years Old you need:

Start your tasting with Bushmills 10 Years Old neat in a glass and discover its inner aromas. Add then a dash of water and unleash the fruity and spicy sensations of the whisky. Chill your glass with an ice cube for a refreshing drink, but wait until it gets to room temperature for the flavours to rise.