Sales | Up to 50% off! >
Our CellarWhisky Whisky by countryIrelandBushmills Sherry Cask Steamship 1L 40° 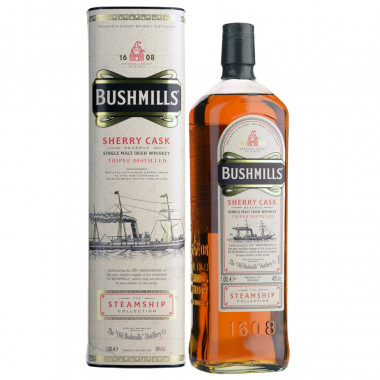 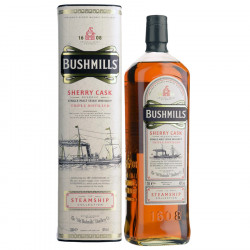 Bushmills Sherry Cask Reserve is a beautiful tribute to the SS Bushmills, the distillery's steamboat that sailed across the Atlantic from 1890 to deliver the United States.

It pays tribute to the SS Bushmills, the distillery steamer that operated from 1890 trips across the Atlantic to the United States to deliver Bushmills whiskey.

It is a rich whiskey with sweet notes that evoke pineapple, cherry, chocolate and cinnamon.

Nose: sweet and rich with jammy red berries and ripe pear. Notes of caramel grilled after a few minutes.

Palate: pieces of pineapple marinated in rum and sprinkled with cherries and hints of chocolate.

Finish: long and sweet notes of light fruit with hints of cinnamon.