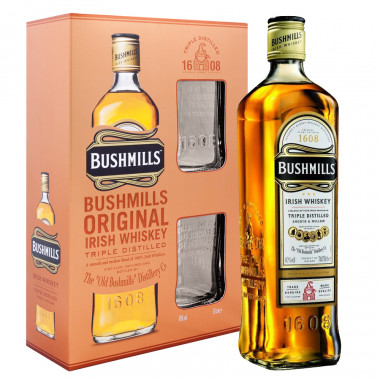 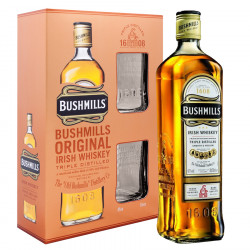 A reference Blended Irish whiskey from the Bushmills distillery, in its box with 2 tasting glasses.

A reference Blended Irish whiskey from The Old Bushmills distillery based on triple distillation.

Its unique blend consists of more than 50% malt whiskey from the Old Bushmills Distillery and Irish grain whiskey aged up to 5 years in oak barrels. This grain whiskey is blended with a Single Malt whiskey distilled 3 times to bring balance and sweetness to the Bushmills Original and is completely peat-free.

A box with two tasting glasses.

Nose: light, fresh, fruity and almost tangy. Citrus flavours (lemon) typical of the Bushmills malt prevail, with a hint of cinnamon, peach and vanilla, with light aromas of creme brulee.

Finish: of moderate length, dry with grain and spicy aromas.