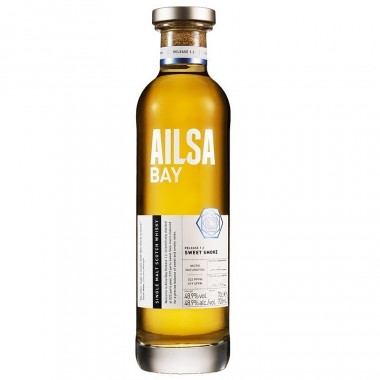 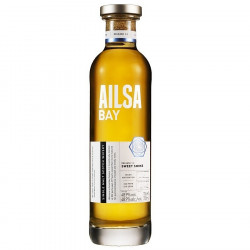 Second version of the Ailsa Bay Single Malt, peatier and sweeter than the previous one.
It is the only Scottish whisky to undergo a process called "micro maturation".

Second version of Ailsa Bay Sweat Smoke Single Malt, both peatier and sweeter than the previous version. It went through the same micro-maturation process as the first edition.

The liquid is then transferred to more traditional, first fill and second fill American oak barrels for several years. This process is the first of its kind in the Scotch whisky industry. Ailsa Bay Sweet Smoke has notes of moist heather, vanilla oak, creamy caramel and candied orange zest.

Ailsa Bay is a distillery located in the Lowlands, established in 2007 and benefiting from all the latest innovations in technology.

These have enabled the production of a peaty Single Malt, unique for the region. It is the first whisky to specify the PPPM peat indicator (precise measurement of the phenol content. The higher the phenol level, the more peaty the whiskey.). Ailsa bay Sweat Smoke contains 022 ppm and SPPM sweetness (measure of sweet taste. The whiskey presents 019 sppm is the perfect balance between peat and sweetness).

The Ailsa Bay distillery was founded in 2007 on the Girvan site, in the Lowlands region. The name Ailsa Bay is inspired by an island off Girvan, Ailsa Craig.

Ailsa Bay innovates on the technical means to distill with know-how and measured with precision.

It is also the only distillery to use a process called "micro maturation" to produce its whisky. The distillate is poured into baby Bourbon Hudson barrels with a capacity of 25 to 100 liters, for six to nine months. The relatively small barrels increase the contact of the distillate with the wood and thus produce rapid and intense maturation. The liquid is then transferred to virgin American oak barrels. This process is the first of its kind in the world of Scotch whisky.

Nose: Notes of smoky wood with a slight hint of heather. Gradually, the sweetness of the oak comes to replace the smoky notes. This sweetness is reinforced by its notes of caramelized apples.

Palate: The initial peaty liveliness is quickly balanced by an explosion of vanilla. The palate oscillates between smoky, fruit and caramel notes.

Finish: Balanced with a perfect synergy between the sweetness of the notes of oak and the dry notes of peat.