Sorry, your thread has been archived, this is a new chat
Our CellarRum CellarTypes of rumOld RumLa Hechicera Rum Mojito Gift Box 70cl 40° + 1 Glass 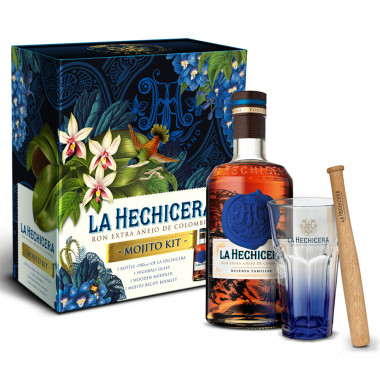 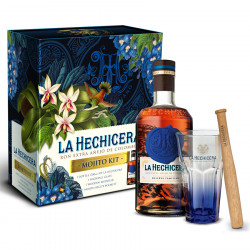 Set consisting of rum La Hechicera, a tasting glass, a cocktail masher and a recipe book.

The rum La Hechicera (the enchantress), is a blend of rums aged between 12 and 21 years aged in American oak barrels previously burned, according to the aging method Solera. It has no additives or added sugar.

This rum is a tribute to Colombia, country to nature and breathtaking biodiversity.

An emblematic cocktail from the Caribbean, Mojito will sublimate La Hechicera rum. An invitation to discovery and original experiences with a recipe book contained in this box.

It is in the heart of Colombia, nestled between the Magdalena River and the Caribbean Sea, that the small bodega Casa Santana has been mixing the best La Hechicera rum for more than twenty years.

A craftsmanship derived from the experience of the Master Blender Giraldo Mituoka Kagana that he acquired over time in this lively city and rich in exotic flavours.

The result is a rum of great finesse, rich in flavours that reflects the biodiversity and all the beauty of the country.