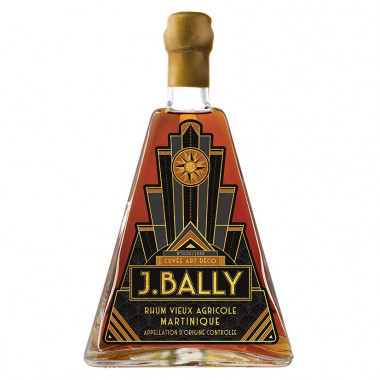 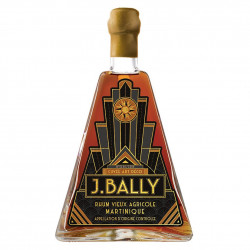 The second edition of Bally Art Déco is the result of a blend of three vintages : 1999, 2006 and 2007. The result is a balanced rum with remarkable freshness.

The second edition of Bally Art Déco is the result of a blend of three vintages : 1999, 2006 and 2007. The result is a balanced rum with an absolutely remarkable freshness of expression.

Bright and generous, its aromatic and taste palette notably highlights fruity and floral notes of incredible diversity and rare depth, as evidenced by the particularly rich finish.

Established on the Carbet estate near Mount Pelée, Bally is a benchmark in the world of Martinican rums! It is one of the oldest distilleries in Martinique. Its rums are characterized by the finesse of their aromas, a good roundness in the mouth and a great fruity richness.

The history of the Bally distillery begins with the founding of the Habitation de Lajus in 1774: at the time, this estate benefited from the volcanic lands of Carbet as well as the mansion and the small sugar plantation that was already established. Shortly after the catastrophe following the eruption of Mount Pelée, from which he narrowly escaped, the Domaine Lajus was the subject of a real estate foreclosure.

In 1917, Jacques Bally, a young engineer freshly graduated of the Ecole Centrale de Paris, acquired the estate and decided to restore it by equipping it with a new distillation column and a steam engine.

In 1930, he invented the famous pyramid-shaped bottle that would make the brand famous, as well as the distillation and barrel-ageing techniques that are mostly still used today.

Palate: soft, balanced. Full of freshness, the attack on the palate spreads cane sugar over the taste buds with floral, spicy and liquorice accents. On the mid-palate, notes of tobacco, caramel and lime blossom honey capture the entire palate. Gradually, candied ginger, dried fruits (date, fig) and cinnamon rise to the surface of the taste palette.

Overall: long, tasty. The final shows itself more and more pastry. The very end of the palate is a melting pot of ripe fruits (reinette apple, pineapple, banana, lemon) on a background of liquorice and roasted flavours (coffee).