Our online store is open for your orders. Learn more about delivery >
Our CellarWhisky Rare & Vintage WhiskiesConnemara 22 Years Old 70cl 46° 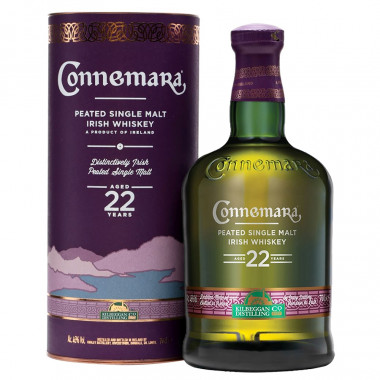 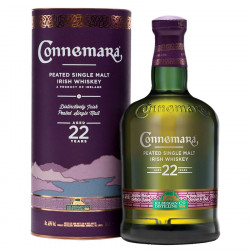 Connemara 22 years old is a beautiful peaty whiskey made from the oldest Bourbon barrels of the distillery.

Lovers of peat and Irish whiskey will definitely rank the 22-year-old Connemara among the exceptional spirits.

Produced from the oldest barrels of the distillery, this Single Malt develops complexity, delicacy and elegance of smoke and vanilla notes. The whiskey thus benefited for a minimum of 22 years from a maturation in Bourbon barrels of first filling.

It has a rich style with woody and spicy aromas of ginger, apple and fresh lemon.

The whiskey production ranges from light blends such as Inishoven or Millar’s to offbeat peated malts such as Connemara. Most of the maturation facilities and a part of Cooley’s warehouses are located in Locke’s (Kilbeggan). Cooley differs from the other distilleries as it operates a double distillation process, while triple distillation is the hallmark process of Irish whiskey distilleries Bushmills and Midleton.

These traditional distillation methods associated with natural ingredients and long years of maturation in oak casks, help create an exceptional whiskey. End of 2011, the Cooley distillery has changed owner and been purchased by the American group Jim Beam (owner of the Laphroaig distillery).

Nose: notes of apple, vanilla and chopped herbs. It then opens on smoked perfumes while elegance with a hint of burnt wood.

Palate: Wood smoke is more pronounced on the palate, followed by notes of grilled fruit and fresh lemon zest.

Finish: long with spicy and woody notes accompanied by peat.