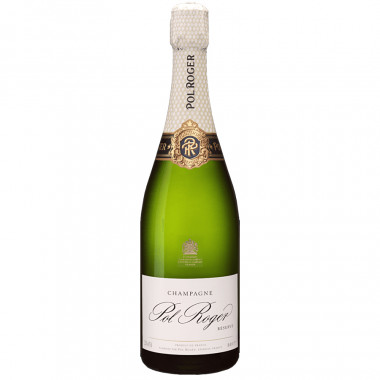 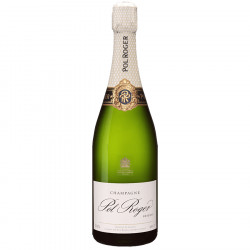 The cuvée Brut Réserve of Pol Roger is a refined and elegant champagne, resulting from a blend of 3 grape varieties: Pinot Noir, Pinot Meunier and Chardonnay.

All the know-how of the Pol Roger house is revealed in this elegant and refined cuvée. Ideal for any occasion, the cuvée Brut Réserve offers an optimal balance between power and finesse, which makes it a remarkable aperitif wine or the preferred companion for an early meal.

The Brut Réserve is the result of the assembly in equal parts of the three Champagne grape varieties: pinot noir, pinot meunier and chardonnay from 30 different vintages. 25% of reserve wines are used for the production of this cuvée:

- Pinot Noir, for the frame, the body and the power, comes mainly from some of the best wines of the Montagne de Reims.

- Pinot Meunier, for freshness, roundness and fruitiness, comes from several vintages in the Marne Valley and the Epernay region.

- Chardonnay, for its aromatic complexity, finesse, elegance and lightness, comes from Epernay and some of the best wines of the Côte des Blancs.

After four years of cellar aging, its style combines complexity, balance and distinction.

For 5 generations, Pol Roger House has built a fine reputation among the noblest brands of champagne. 170 years of experience serving style and elegance.

Maison Pol Roger was born in 1849 with the sale of wine in the small village of Aÿ, the birthplace of its founder. The growing development of his activity allowed him to settle in Épernay in 1851. Quickly, Pol Roger favored the production of brut champagne, particularly appreciated by the English. When he died in 1899, the brand had already acquired notable recognition.

During the 1900s, Maison Pol Roger increasingly exported its products abroad, attracting many leading personalities around the world.

The First World War, prohibition in the United States, the revolution in Russia and the crisis of 1929 are all obstacles that complicate the affairs of the Pol Roger House, which nevertheless manages to maintain its presence on the different continents .

After the Second World War, Winston Churchill became the emblematic figure of the House, an unconditional customer of the Pol Roger champagnes, which saw its ranges expand like sales which experienced meteoric growth.

The 2000s saw the launch of the "Rich" vintage approaching a demi-sec. That same year, the logo and the packaging of the bottles were revisited towards more elegance and distinction.

In 2007 the Pure, Extra Brut cuvée came to complete the range. In order to keep Pol Roger at a world-renowned level of excellence, the house, supported by a 92 hectare vineyard, has constantly improved the quality of supplies.

From 2001 to 2011, the production equipment was transformed and renovated, so that cellar master Dominique Petit could vinify cuvées of great regularity and remarkable homogeneity.

Since then, Pol Roger has worked to preserve their essential values: excellence and independence, through their exceptional vintages.

Palate: behind a frank and dynamic attack, the wine offers a beautiful harmony and a pleasant freshness, while presenting a certain structure. On the palate, flavours of cooked fruit (quince jelly, apricot jam) happily accompany with fragrances of beeswax and acacia honey.