Sales up to 50% off. 2nd markdown : extra 10% off on textile items already on sale! Discover >
Our CellarWhisky Whisky by countryScotlandHighlandsBalvenie 21 Years Old Single Barrel 70cl 47.8 ° 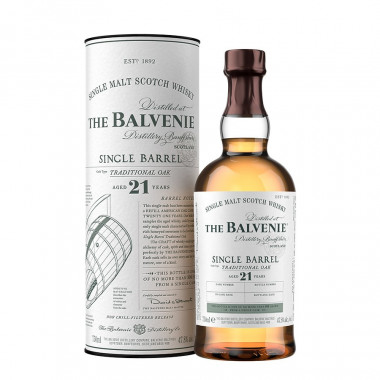 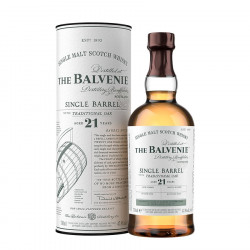 Balvenie 21 years old is a vibrant tribute to Single Barrel whisky with its soft, fruity and gourmet singularity.

The Balvenie Traditional Oak is a high quality Single Cask that has aged exclusively in American oak barrel for 21 years.

This unique expression is the latest of four bottlings in The Balvenie's Single Barrel range.

This Single Barrel offers a tasting as it comes out of the barrel, with notes of fruit, vanilla, honey and a touch of spices.

In a limited edition, 4,800 bottles of which only 650 for the French market of this expression were bottled.

Nose: floral and fruity, notes of lily of the valley mingle with refreshing scents of orchard fruit and coconut. Vanilla, some spices and woody notes of oak are added.

Palate: sweet and greedy on fresh fruits, vanilla and honey. The spices enhance the whole.

Finish: long and sweet with warm notes of white pepper and a hint of coconut.