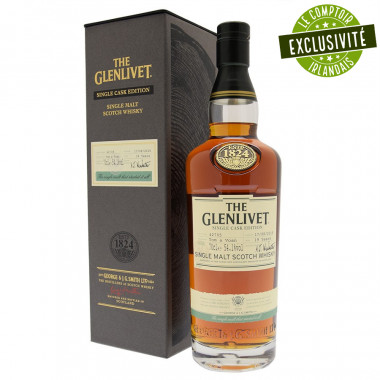 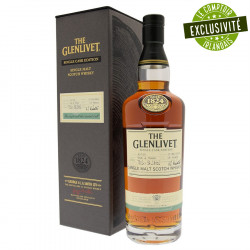 The Glenlivet 19 years old Tom A Voan is an exceptional limited edition presented by Le Comptoir Irlandais for its 30th anniversary.

This unique Single Cask from the Glenlivet distillery has been selected for the Comptoir Irlandais' 30th anniversary.

This is a 19 year old rare whisky, non-chill filtered with a unique character.

To make this Single Malt, The Glenlivet has used cask number 42705 called Tom a Voan, in memory of the wood from the Livet valley, where the distillery was created by George Smith.

This kind of wood was used before 1824 to age whiskies, time where distillation was illegal.

With its 19 years long maturation, this whisky has gained smooth and rich notes of fruits, spices and dark chocolate. An exceptional character.

Their name was then Gow, which they changed into Smith to give it a more English consonance, as a battle was lost against the English. In 1823, the ability to obtain a license was created with the enforcement of the Excise Act. And George Smith was the first to ask for and obtain his legal license to operate a distillery. He started his activities in a farm. The Duke of Gordon, owner of the field and father of the first law on distillery legalization was quite enthusiast about the results of this first legal distillery. But the illegal distillers were not. They even threatened George Smith, which led the Duke of Gordon to lend him two pistols, still exhibited today in the distillery’s museum. In 1849, his son James Gordon Smith founded a distillery named Delnabo, near Tomintoul. As this did not turn out to be a success, George took over the management of his son’s distillery and renamed it Cairngorn. In 1858, George associated with his son James Gordon Smith, to build a bigger distillery near Minmore, where is located the current distillery. The two old distilleries were then closed and dismantled. The new distillery was located near the railway, which would be most helpful in the following. The commercial success is also to be attributed to the exclusive distributor of the distillery’s products, Andrew Usher & Co, who by the way invented the first consistent commercial blend, consistency being a key value of blended whiskies. In the 1880’s, The Glenlivet had such a reputation than a few shameless distillers even borrowed the name. John Gordon Smith partially won the trial as he sued many of the competitors, and became the only one able to use the name and became “The Glenlivet”, while others could only add the word “Glenlivet” to their own name. The brand was established in 1870. The current owner wishes to go further and oblige his competitor to relinquish any mention to Glenlivet in their names. He set an example while renaming one of the group’s distillery, formerly “Braes of Glenlivet” in “Braeval”. In 1953 the distillery merged with Glen Grant. In 1958, the original buildings were destroyed by a fire. At the beginning of the 1970’s, the Glenlivet and Glen Grant purchased the Longmorn distillery and formed the Glenlivet Distillers group, bought back in 1977 by the Seagram group. The distilleries of “The Chivas & Glenlivet Group” belonging to Seagram were purchased by the Pernod-Ricard group on December 19, 2001. The only closure met by the Glenlivet was World War II, as the country was hit by barley shortages. Apart from the Single Malt production, the distillery’s whisky is being used in quality blends, such as Chivas Regal and Royal Salute.

Products from Glenlivet (The)

Palate: a smooth and rich texture envelops the palate. Evolving on dark chocolate flavours with a hint of ginger, raspberry notes and spicy liquorice.