Our stores remain open during confinement! I discover the measures >
Our CellarArchivesOctomore 4 70cl 62.5° 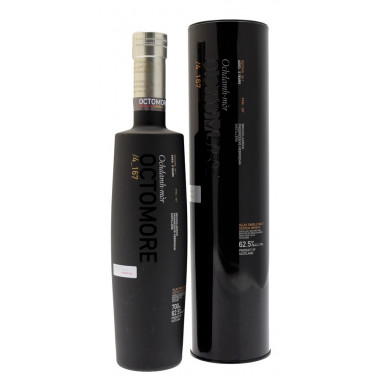 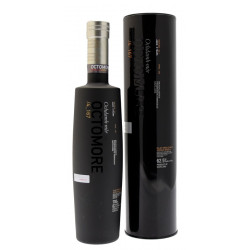 Even more powerful, this limited edition of Octomore pushes the limits of the world's most heavily peated Single Malt, in a smooth, intense 4th version.

Intense and smooth, the fourth, limited edition of Octomore reveals a stunning strength and pushes the limits of the wolrd's most heavily peated Single Malt.

This version summits at a titanic 167ppm against 152ppm (phenols per million) for the previous edition. The luxurious, opulent malt attacks with a peat wave and opens on medicinal, floral notes of aromatic herbs, and smoky notes with sooty accents.

Octomore 4 is the unparalleled, unchallenged leader of the peated Scotch Single Malts.

Nose: bursting with smouldering peat, in which is cradled a bunch of yellow flowers and a pinch of wild thyme and sage.

Palate: a quite heavy attack, yet smooth and lush with a malt richness, less firm than other versions. Evolves onto notes of vegetals and flowers.

Finish: quite mineral, dry and with a focus on spices.