Sales up to 50% off. 2nd markdown : extra 10% off on textile items already on sale! Discover >
Our CellarArchivesPowers Signature Release 70cl 46° 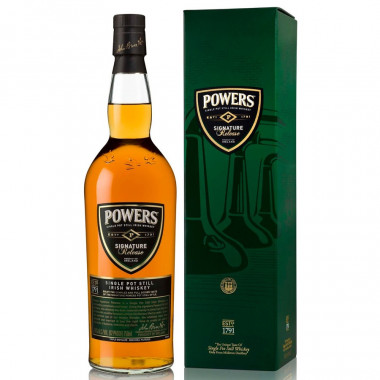 Second Single Pot Still release of the brand, Powers Signature Release is a premium Irish whiskey. It has the typical spicy character of Powers with beautifully peppery, fruity and vanilla aromas associated with appealing notes of honey.

Powers Signature Release is the result of a maturation in American Bourbon barrels, and also in Oloroso Sherry casks. This additional finish brings out more subtle flavours.

Nose: floral and herbal notes with touches of nutmeg, fig and black pepper on a soft bed of vanilla and fruity flavours.

Palate: gently, it opens on rich and spicy vanilla and then evolves towards woody aromas, revealing notes of liquorice and cinnamon joined by subtle fruity flavours of melon, green apple, pear and a hint of crispy barley.

Finish: long and complex, overflowing with honey and spices.