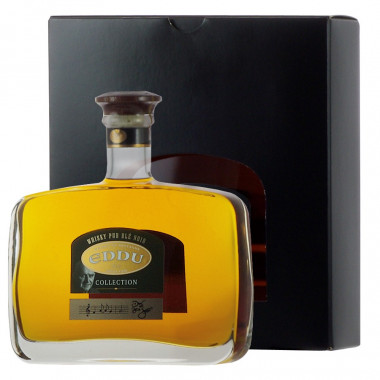 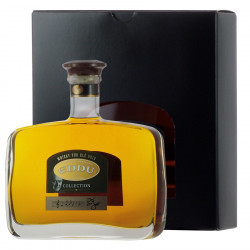 Produced in 580 bottles numbered and signed by Dan Ar Braz, this new limited edition Eddu is a 10 years old whisky grading at 47 °.

This new limited edition Eddu of the Distillerie des Menhirs has been created with the help of Dan Ar Braz, famous artist of the Breton culture. Produced in 580 bottles numbered and signed by Dan Ar Braz, this new whisky succeeds to the edition of Patrick Mahé. This third edition of the Eddu collection is delivered in a black case.

Eddu Dan Ar Braz is a 10 years old whisky grading at 47 ° which was selected from 5 samples by the artist. His choice was focused on this warm whisky with sweet and spicy notes.

The Distillerie des Menhirs turned to Dan Ar Braz, a man who shares the same values as its team around the Breton culture and the valorisation of the know-how of the "terroir". During the presentation of this new expression, Dan Ar Braz said "we are not so different, you are craftsmen / distillers and I am a craftsman of music ...".

"Hep ijin, nep krouadur" is a phrase in Breton meaning "without imagination, there is no creation".

Located in Brittany (near Quimper), the Distillerie des Menhirs of Plomelin stands out for its originality. Indeed, it transforms black wheat and apples to cider, both emblematic productions of Brittany, into a range of whiskeys, spirits and high-quality cider.

Guillaume, the son of Francès, became a known figure as local distiller in the public workshop of Pont-Menhir, Plomelin. So as for his son René. Francès, Guillaume, René.. Guy almost broke the family legacy training as a maths teacher. But the distillation gene took over and Guy came back on the track laid down by his ancestors. In 1986, Guy and his wife planted orchards and built in Pont Menhir their own distillery, hoping to manufacture a new spirit, unheard of in Brittany: The Pommeau des Menhirs, which would become the first Pommeau in Brittany to bear an Appelation of Controlled Origin.

Having mastered the art of distilling cider, Guy Le Lay, always seeking new products boasting the authentic Breton identity, develops the idea of distilling a new cereal: Breton buckwheat. In 1998, new premises are built and a new still purchased: the idea becomes real. The expert advice of a Spirit Master will lead him to success and guarantee the exceptional quality of the whisky to come…

Nose: spicy, with notes of coriander and turmeric. After few minutes aromas of chocolate and liquorice appear. Very perfumed.

Finish: it is very long, after a few minutes it is still present in a smooth way, not aggressive despite its 47°.