Sales up to 50% off. 2nd markdown : extra 10% off on textile items already on sale! Discover >
Our CellarArchivesBenRiach 10 Years Old Curiositas 70cl 46° 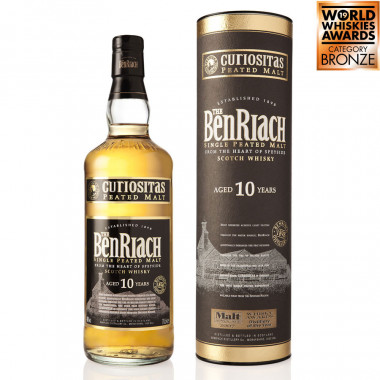 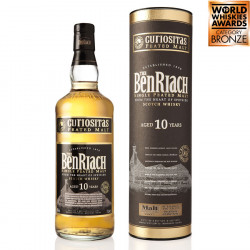 BenRiach 10 years old Curiositas is a return to the original character of Speyside and the flavour of typical peated malts of the 19th century.

This whisky uses a variety of heavily peated malted barley to produce a fresh and unique expression. The Single Malt has wonderful peated notes, intelligently combined with fruity, floral aromas and a strong woody presence in the finish.

Traditionalists believe that peated malts achieve an optimal balance between infusion of peat and oak after 10 years of ripening. Thus, this whisky seeks to find the original character of Speyside and the flavour of typical malts and peat of the 19th century.

Products from The BenRiach

Nose: rich, powdered, peated, earthy and liquoriced. Then, spices (curry, cinnamon) are coming and menthol too.

Palate: bright, fat, smoked with peat and flower of the field (dandelion). It evolves on liquorice and chocolate.

Finish: rich and liquoriced. It develops with firmness and power on the peated smoked barley.