Sales up to 50% off. 2nd markdown : extra 10% off on textile items already on sale! Discover >
Our CellarArchivesBlack Bush Warehouse Gift Pack 70cl 40° + 2 Glasses 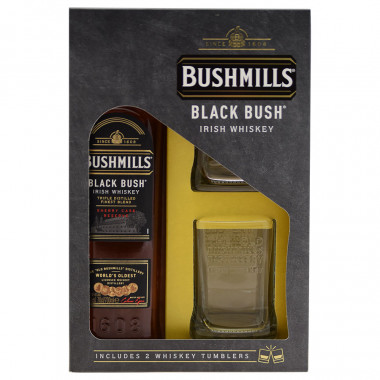 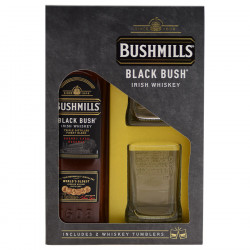 An award-winning Blended Irish Whiskey available in its gift box with 2 tasting glasses.

Set including a bottle of Black Bush whiskey from Bushmills Distillery and two tasting glasses.

Composed of more than 80% of Single Malt aged 7 to 9 years, this Black Bush has aged mainly in Spanish Sherry oak barrels and American Bourbon barrels.

It has oaky, fruity and slightly spicy notes.

This Blended Whiskey has been rewarded many times, including winning 93/100, Excellent, Highly Recommended, at the Ultimate Spirits Challenge in 2013.

Nose : fresh and full-bodied, with strong woody (oak and vanilla) and fruity flavours (red berries, nuts and Sherry), releasing caramel, praline and roasted aromas (coffee) after a while in the glass.

Palate : mellow and plain, delicious and inviting with melted buttery and caramel notes, and fruits, grapes and candied lemon originating from the Sherry cask. Evolving on malted barley and rose.