Sales up to 50% off. 2nd markdown : extra 10% off on textile items already on sale! Discover >
Our CellarArchivesGlenmorangie Tale of Cake 70cl 46° 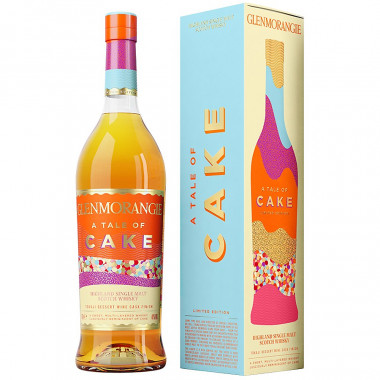 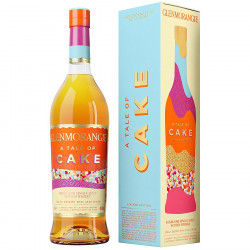 A new whisky available in limited edition which is inspired by the world of desserts to offer an original tasting with a soft and mellow result.

Glenmorangie introduces us to its latest limited edition imagined by Dr Bill, director of creation of whiskies at the distillery, which follows on from the "Private editions" series.

This new "A tale of Cake" bottling is inspired by the simple and gourmet pleasure of a dessert, in reference to the best moments shared around a cake. To reproduce this delicacy with a sweet and mellow result, this Glenmorangie whisky benefited this time from aging in Tokaj barrels from Hungary, an exceptional sweet wine tasted as a dessert.

We thus discover a Single Malt with a warm colour, with an incredibly colorful palate, complex and rich in notes of honey, white chocolate and fruits.

To complete the tasting of Glenmorangie A tale of Cake, the distillery worked with Dominique Ansel, pastry chef nicknamed the "Willy Wonka of New York" who imagined the perfect cake for this expression: a delicious pineapple pastry with its flavours fruity and sweet composed of slices of almond sponge cake soaked in whisky syrup and covered with fresh pineapple and brown sugar ganache.

Nose: powerful and rich in fruity flavours: passion fruit, peach, pear and mango. Salted notes of bread and oak sap then emerge, along with an unexpected mineral touch reminiscent of flint. We also find the typical notes of Glenmorangie: honey, vanilla and almond, with also a hint of milk chocolate.

Palate: an astonishing sensation, pulpy and acidic, which reveals sweet aromas like a candy: honey, white chocolate, apricot, almond, vanilla and pear. Everything is balanced with tangy touches of orange and menthol, two aromas that have made Glenmorangie famous.

Finish: a magnificent blend of honey, chocolate, almonds and pecans lingers on the palate.

Our CellarArchivesGlenmorangie Tale of Cake 70cl 46°