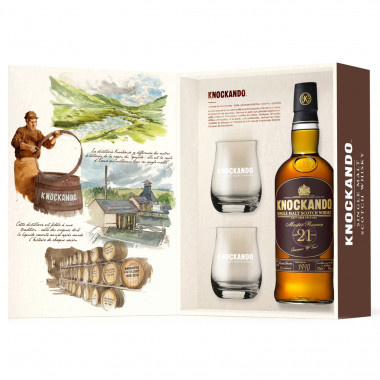 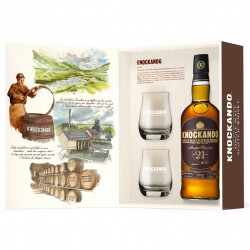 This 21 Year-Old malt results from a careful selection of the best casks from Knockando's warehouse. The three types of casks selected for its maturation (first fill and refill Bourbon barrels and a Sherry cask) accounts for its silkiness and incredible mellow sensation, underlined by delicate red fruit flavours.

The Classic Malt Selection offers an amazing journey around Scotland, to discover the main malt whisky-producing regions. Each one of them expresses the genuine character of its land of origin, through unique aromas and temper. For each Single Malt, spring water, soil and time work their magic to bottle the very essence of a land.

Founded in 1898 by John Thompson, the Knockando distillery sits on the Spey banks, the river from which Speyside takes its name.

This region of Scotland is known for its refined malt whiskies. The distillery’s name derives from Gaelic “Cnoc an Dhu”, translating as “small black mountain” in English. The Knockando’s tradition is to bottle whisky from a single vintage, or “season”. This harks back to the time when distillation was a seasonal activity, only done in autumn and winter months. Today, Knockando is distilled all year-round, but is still bottled “one season at a time” and each bottle proudly bears its year of distillation. The unique character of Knockando ranks the distillery in the Classic Malts Selection. Created more than 20 years ago, this selection recognises Single Malts crafted in the tradition of iconic distilleries, and offers the most impressive whisky styles Scotland has to offer.