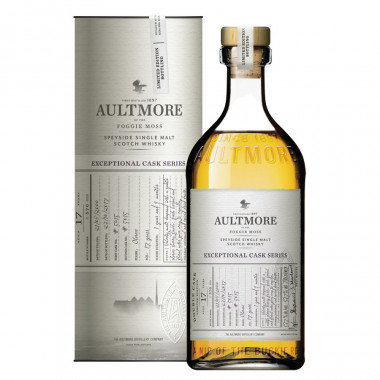 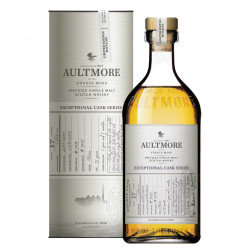 The whisky of this edition was distilled on 21 August 2000 and was able to benefit from a maturation of 15 years in barrels of Bourbon before a finish of 1 year and 9 months in Oloroso Sherry barrels. It was then bottled on 23 October  2017 with only 570 bottles available.

This exceptional edition of Aultmore has a elegant and malty character with very fresh notes and vegetal and floral dominance.

Aultmore comes from the Gaelic "An t-Allt Mor", meaning literally "the big stream", in reference to the stream that feeds the distillery in the heart of the Foggie Moss. The distillery is located in the golden triangle of Scottish whisky, the Speyside.

Aultmore has been producing malt whisky since 1897, yet little is known about this obscure distillery. Often cloaked in thick fog and exuding an air of mystery, the sparsely populated land surrounding its site has always felt somewhat isolated. The distillery sits in the sweeping hills of Moray, just north of the town of Keith on the rolling road to Buckie.

It was built by Alexander Edward, close to curious terrain called the Foggie Moss. This enigmatic area, well known for illicit distillation in days gone by, is home to Aultmore’s water source. Damp, atmospheric conditions prevail here and the water, filtered through the gorse and heather that abounds, is crucial to the whisky’s light, clear character. The entire distillery was rebuilt and expanded in 1972.

The distillery makes a Single Malt which is matured in bourbon hogshead refill, using unpeated barley.

All the whiskies in the new Aultmore whisky range are presented in their natural unadulterated form, non-chill filtered and no added caramel colouring.

Aultmore has been given “Top Class” status as one of 12 single malt whiskies selected by a group of master distillers, which include Aultmore, Benrinnes, Cragganmore, Glen Elgin, Glen Grant, Glenlivet, Glenlossie, The Glenrothes, Linkwood, Longmorn, Macallan and Mortlach.