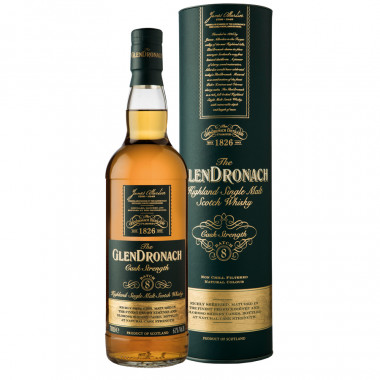 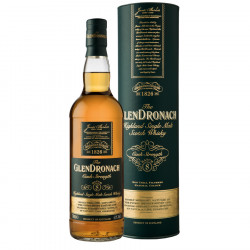 An impressive version of the whisky Glendronach, cask strength and exclusively aged in barrels of Sherry Oloroso and Pedro Ximenez.

This 8th edition of the Cask Strength serie of the Glendronach distillery results from the marriage of Pedro Ximenez cask and Sherry Oloroso cask aged for 10 years and bottled to its natural degree without cold filtration. By presenting its whisky in a 61% cask stregth version, Glendronach offers connoisseurs a more detailed overview of the distinctive profile of the distillery.

For each edition, Master Mixer Rachel Barrie selects the perfect match between two styles of casks before bottling without cold filtration and high strength, as was customary before the early 20th century.

This bottling is a very limited edition.

Produced according to traditional methods, this Single Malt develops a rich and full-bodied face, with all the depth of its long maturation in Spanish oak barrels. There are notes of coffee and candied fruit cake.

Glendronach is one of the most renowned distilleries for working Sherry casks like Glenfarclas.

Nose: Sherry is quite light and dry, with brown sugar and woody aromas. The aromas that develop are reminiscent of sandalwood, oak balsam and aromatic Colombian coffee, with black manuka honey, cocoa and Brazil nuts.

Palate: sweet and rich with power and aromas of mocha, caramel macchiato and chocolate and cherry cake. The richness of sherry quickly permeates the palate with hints of marmalade, raisins and brown sugar syrup. The addition of a little bit of water allows the aromas to develop.

Finish: extremely long and aromatic on coffee, liquorice and cocoa.