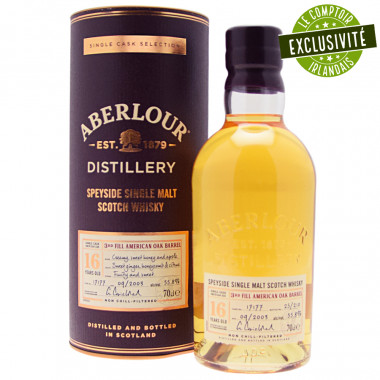 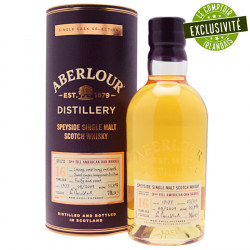 For the creation of this 16-year-old Aberlour exclusively available at Le Comptoir Irlandais, we selected an exceptional 3rd filling Bourbon barrel.

For the creation of this 16-year-old Aberlour, we have selected a third filling Bourbon keg.

One thing is fundamental when tasting a great whisky: the balance between the distillate and the wood. Often the choice is Sherry casks or wine barrels very powerful in terms of aromas, very rich and heavy. The resulting whiskies are excellent of course! These barrels tend to take over the distillate. We are talking about wooddriven whisky, driven by wood.

To highlight the distillate, this whisky has been aged in a barrel with light impact! So we chose a "calm" barrel, 3rd filling! This means that the wood has already served and has already given power to another whisky before. The wood now goes so much sweeter, give age and maturity to this whisky. The fine and precise wealth of the Aberlour distillate will be much more important than in a wine cask! We are talking about a spirit driven whisky, driven by the distillate!

This whisky is bottled to its natural degree, without adding water and thus preserves intact the intensity of flavours.