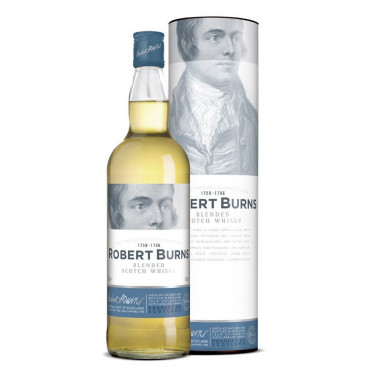 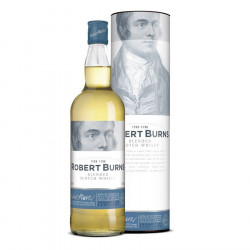 A unique blend assembled with a strong percentage of Isle of Arran Single Malt, raised in refill Sherry casks.

To celebrate the 10th release anniversary of its iconic blend, Arran distillery offers a version reworked in style and content. This unique blend has been elaborated with a strong percentage of Isle of Arran Single Malt, and partly raised in refill Sherry casks. Robert Burns Blend features a new style with modern designs and a cardboard case.

The owners of the Arran Distillery originally strived to produce a Single Malt closer to the Highlands character than to  the Isles. To spread the word about its famous 'spirit', the Arran distillery chose a poet as ambassador. The famous Scottish poet Robet Burns, native of Southern Scotland, praised the spirit many times in his stanzas. Namely, one of his most famous poems is entitled 'John Barleycorn'.

Arran is the only distillery located on the Isle of Arran, Scotland. It has been established in 1995 in Lochranza.

Arran has been a part of the world of whisky for a long time. In the mid 18th century, the island had nearly fifty distilleries (most of them illegal or “moonlight” distilleries), but they all have closed since then. The new distillery opened in 1995 and renewed the tradition of Arran. The spirit produced on Arran received the “whisky” label in 1998.

Products from Isle of Arran