#SaintPatrickTogether - Our selection for March 17th! I discover >
Our CellarBeers & CidersIPAInnis & Gunn Mangoes On The Run 33cl 5.6° 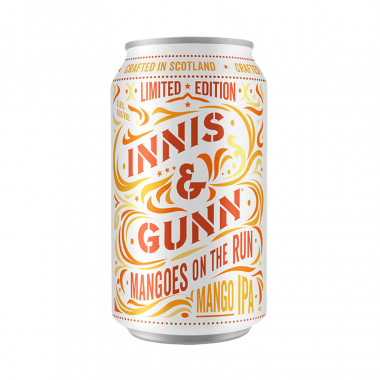 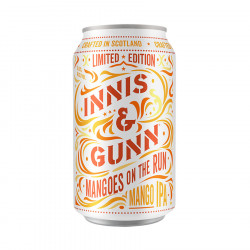 A richly fruity IPA with sweet flavours of mango and citrus. Refreshing, this Scottish beer retains a slight bitterness.

For this IPA, the Innis & Gunn Scottish Brewery is all about fruit!

In addition to the rich flavours of mango and citrus that characterize this Mangoes On The Run, rare and very fruity hops (Hercules, Citra and Simcoe) have been used to make it a light and refreshing IPA.

This product is only available in one of our 45 shops in France.

Innis & Gunn is a Scottish brewery based in Edinburgh. Since its establishment in 2003, it became quite famous for its beers aged in oak casks. Innis & Gunn only uses the most flavoured extracts, which means that each kilo of barley and hop produces less beer than for other brewers. Innis & Gun always favoured quality over quantity…

The brewery accidentally discovered that the beer taste improved considerably when matured in oak casks. Indeed, in 2002, a famous whisky distiller wanted to impart a sweet malted taste, characteristic of beer, to oak casks and then use them to age whisky. The beer stayed up to 30 days in the oak cask, and then was thrown away and replaced by whisky, which was a success. But a while later, some distillery employees tasted the beer aged in the cask and found it amazing.

This is how the beer got tested and how Innis & Gunn Original was born. Since then, the distillery undertook other experiments such as the “rum finish”, a type of beer aged in ex-rum casks...

Palate: light and refreshing with aromas of tropical fruits.

Finish: smooth and silky with a persistent hoppy bitterness.