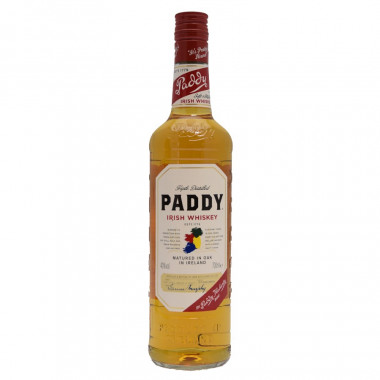 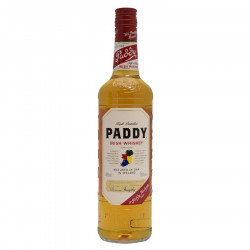 Paddy is a very popular whiskey in Ireland and in France as well, as it is the second best selling whiskey. Paddy is a triple-distilled blended whiskey with a high percentage of Pure Pot Still. It combines whiskies aged for 7 years in oak casks that confers Paddy its typical mellow, fruity and vanilla aromas and golden colour.

Nose : a sophisticated and pleasant blend of citrus (lemon, grapefruit) and spicy notes married with vanilla, honey, woody and slightly malted aromas, for a fresh, light and smooth feel.

Palate : round, mellow and full-bodied, releasing its malted, roasted cereal and spicy notes, with vanilla and honey hints.

Finish : bittersweet and slowly fading on slightly round malted and woody notes for a lingering pleasure.

Paddy may be enjoyed neat or on the rocks to release aromas.
It is a perfect whiskey for cocktails and Irish Coffee.