Sales up to 50% off. 2nd markdown : extra 10% off on textile items already on sale! Discover >
Our CellarRum CellarTypes of rumOld RumDon Papa 10 Years Old 70cl 43° 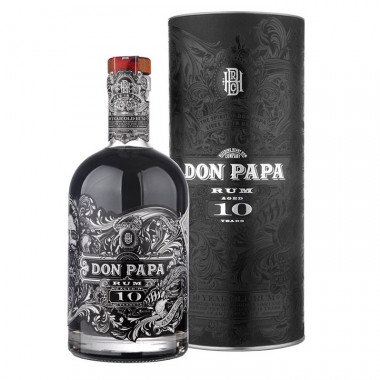 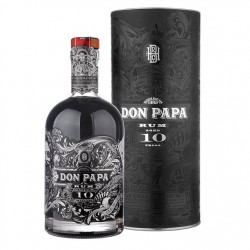 Don Papa 10 Years Old is a rich and intense rum that may be enjoyed neat or over ice.

A limited edition of this Filipino rum, Don Papa 10 Years Old is a blend of rums matured on the island of Negros, on which grows the sugar cane, main coumpound of the rum. Only the richest and sweetest liquid molasses have been selected to craft this exceptional spirit.

The distinctive feature of this expression is its maturation in American oak Bourbon casks, re-burnt for more intense vanilla and oak flavours.

With their maturation process reaching the highest level of alcohol evaporation in the world, the so-called angels' share, rum produced in the Philippines develops remarkably concentrated flavours. This is what partly explains the dark color of the rum.

Don Papa 10 years old is a rich and intense rum that may be enjoyed neat or over ice.

The quantities are limited to 1 bottle per order.

Nose: intense and strong with notes of dried fruits (sultanas) and cocoa.

Palate: rich and silky with a touch of spice and oak.

Finish: long and smooth with notes of cocoa and vanilla.