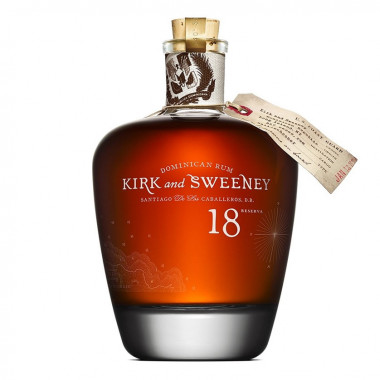 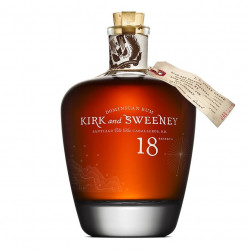 Produced in the Dominican Republic, from molasses, this 18-year-old Kirk & Sweeney has aged in American oak barrels for twelve long years, during which it slowly became soaked with aromatic flavours.

The name of this rum comes from the period of prohibition, during which a smuggling activity was sending rum from the West Indies to the United States on board schooners.

One of them was named "Kirk & Sweeney" and gave its name to this rum with the bewitching scent of sherry and molasses, extended by aromas of vanilla, a hint of caramel and dried fruit.

Before entering US territorial waters, the schooner would drop anchor and sell rum to the small boats alongside it. Faster and more maneuverable than the big coastguard boats, they brought rum ashore without being worried.

The Kirk & Sweeney range is composed of molasses rums distilled in Santiago De Los Caballeros in the Dominican Republic. These rums are traditionally made from sugar cane juice and then aged in American oak barrels. Their beautiful mahogany colour reflects complex flavours of cane sugar, dried fruit, vanilla and toasted oak.

Nose: intense vanilla followed by the typical scents of Sherry and grapes. Then we find scents of burnt sugar cane that envelop the whole.

Palate: rich palette introduced by vanilla. The fruity notes (dried fruits) then rub elbows with the spices in a delightful exchange.

Finale: a persistent finish in which the notes of the nose return: woody notes (oak), Sherry and grapes.