Our online store is open for all your home delivery orders.
Our CellarWhisky Whisky by countryScotlandBallantine's 17 Years old 70cl 40° 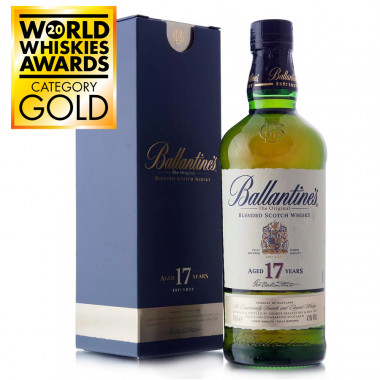 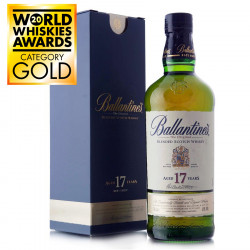 Ballantine's is a blend of Single Malts and Single Grains whisky whose quality is recognized around the world, evidenced by the many awards it has received since its inception. With this premium version of Ballantine’s 17 Years Old, the company states its 75 years of expertise and offers a blend of woody character showing real finesse.

All in smoothness and balance, the whisky recipe has remained virtually unchanged since the first production, and develops complex aromas. It is the result of a combination of over 40 Single Malts and Single Grains Scotch whiskies.

The producers of Ballantine’s were the first to recognize the influence of cask maturation (a technique reserved to Port and sweet wines) on the character of their whisky.

Several warehouses, all located in Scotland, are used for this long and necessary ageing. The addition of aged whiskies also gives its unique taste to the fine, rich drink. The small-scale, craft production of Ballantine’s whisky has been rewarded with the Grant of Heraldic Arms, as a the recognition of George Ballantine & Son as a “Company of the Scottish Nobility”. The arms decking the blazon are still featured today on each bottle produced by the brand. Ballantine’s began in 1827, when George Ballantine opened a grocery in Edimburgh. In 1865, he focused on reselling wines & spirits, and became supplier of the Royal English family. His two sons became part of the company, and the George Ballantine & Son Ltd expanded quickly. As Ballantine’s has been distilled in Scotland for more than a century, it became a real icon in the world of Scotchs. It is a blend of more than 40 different malts.

Palate: invigorating, coats the palate with the same notes suggested in the inhalations, plus bittersweet flavours of roasted coffee or liquorice. Very subtle floral character.

Final: creamy, a hint of roasted notes of coffee with creme brulee and violet flower.

Winner of the Scottish Blended Whiskey from 13 to 20 years old category at the World Whiskeys Awards 2020.