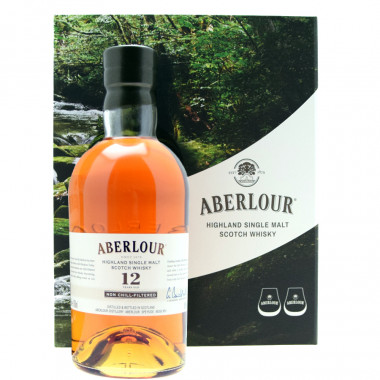 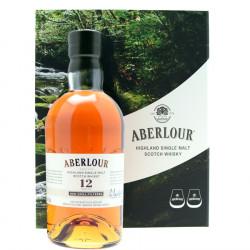 The perfect set for a gift or tasting, Aberlour 12 Years Old Gift Pack contains two branded glasses and tasting notes. The Single Malt Aberlour 12 Years old is a complex and rich whisky whose double maturation in barrels of bourbon and sherry has developed the depth of character and well balanced notes of fruit and spice.

A slight haze may appear when adding water as it is a characteristic of the non-chill filtration. Un-chillfiltered Aberlour  stands out by its surprising and generous aromatic bouquet, with both fruity and spicy notes. This Single Malt remains true to the tradition of Aberlour distillery with its double maturation in sherry and bourbon casks, giving roundness and elegance to the whisky .