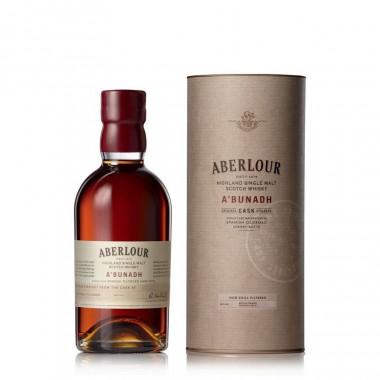 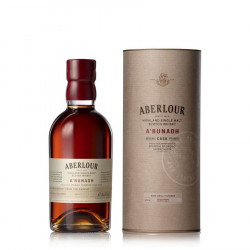 This 8 Year-Old Single Malt has been matured in sherry Oloroso casks.

A'bunadh means "for the source" in gaelic. This whisky is unchillfiltered, meaning no water added, insipred by old traditionnal production. Its assembly reminds the powerful and male tast of the old malts, in average 60%.

Aberlour A'Bunadh is made by 8 to 15 Year-Old whiskies, matured exclusively in Sherry Oloroso casks. This Single Malt is dedicated for experts, seeking for powerful flavors and willing to discover a traditionnal crude malt, manufactured in the loyest 19th traditionnal way.

Palate: orange, black cherries, dried fruit and ginger seasonned by a bitter dark chocolat, all covered by Sherry and oak aromas. Round and creamy.

Finish: strong and deep, with sugary and bitter notes coming from the black chocolat and oak. Nougat flavors, sherry, ginger and a gentle shade of smoke.